To Save the Jews. Righteous Among the Nations from Lutsk 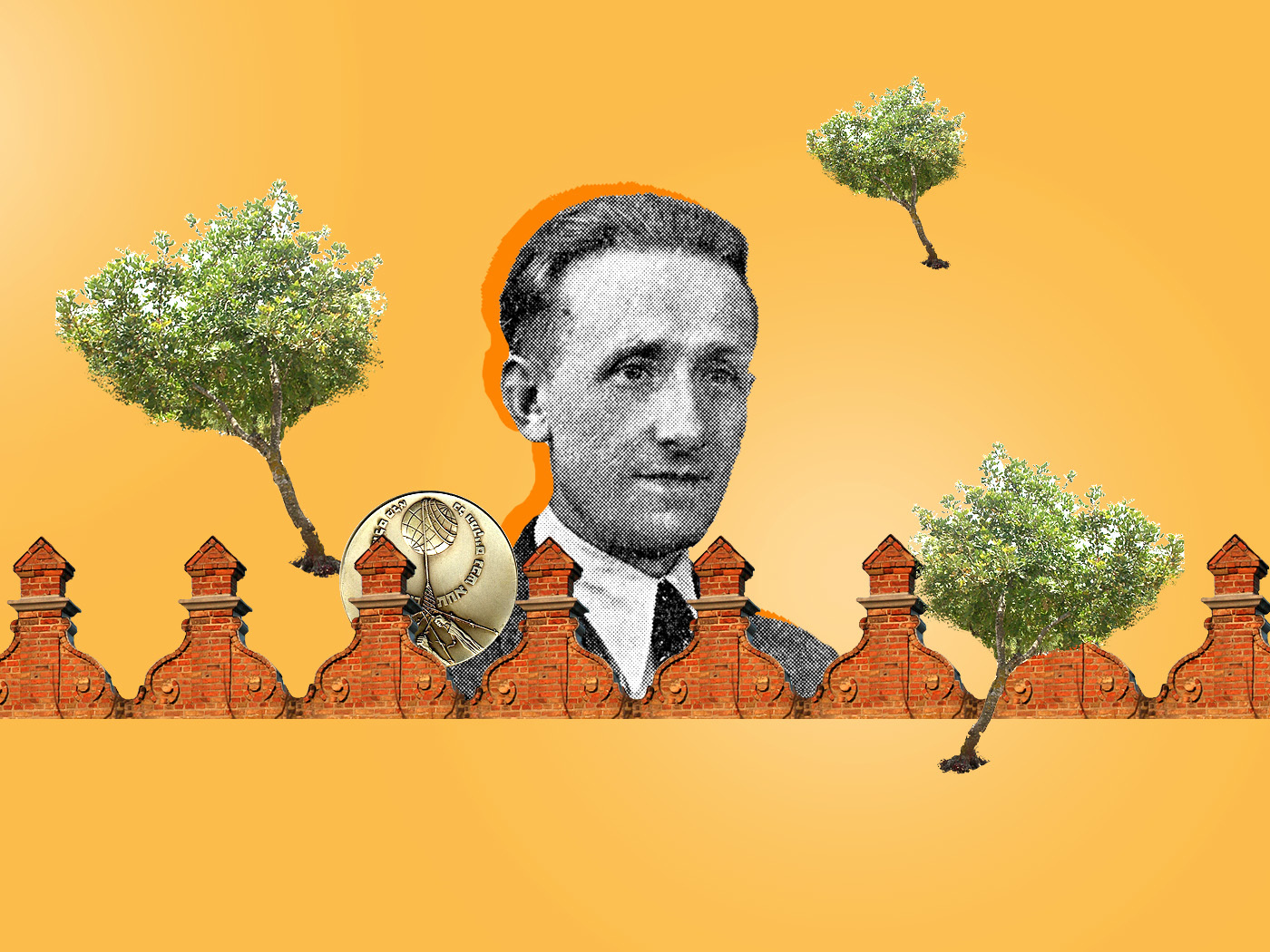 January 27 is an International Holocaust Remembrance Day that was designated by the United Nations General Assembly resolution. Many events take place on this day, people recollect events of the tragedy, the victims and the culprits, the circumstances and heroes. The ones who saved the Jews from sudden death during WWII.

The saviors of the Jews are honoured the title of Righteous Among the Nations. The Yad Vashem Israeli National Memorial awards the title to non-Jews who risked their lives saving the Jews during Holocaust. Vitold Fomenko, a citizen of Lutsk, has this title too. Musician who is a friend of Jews

Vitold Fomenko is likely to have been raised in a Ukrainian-Polish family from Lutsk (?). He is referred to as a Polish and a Ukrainian in different sources. He was a Catholic. He was born in 1905. Some data state that he was born in Lutsk and other mention that he was born in Warsaw. He spent his childhood near a Jewish residential area that is why he was familiar with Yiddish to some extent.

There is information that says that the Fomenko family moved from Warsaw to Lutsk in 1934 where the boy’s father got a job in the military orchestra. There is no information where Vitold gained education. Nevertheless, he gained musical education and taught music in Lutsk. However due to some health problems the boy’s doctor told him to stop performing and find another job. He took a job as a barber in Nahum Sopher’s barber shop who also played the saxophone. It must have been love to music that drew them together.

Work at the barber shop brought Vitold in contact with the Jewish community and he got interested in the Betar Movement. It is a Revisionist Zionist youth movement founded in 1923 in Riga, Latvia. This was something that made him stand out, because being a Catholic, Ukrainian or Polish, he got interested in Jewish affairs. It was in the thirties, when nationalist movements in Europe were becoming glaring and Jewish movements often supported communism which was extremely unacceptable for Polish authorities.

There were some lawsuits against communists in Lutsk, such as a very well-known so-called “The Lutsk Lawsuit” of 1934, the time when the Fomenko family moved to the city. Jagiellonska Street, peaceful and beautiful, the main street of Lutsk before the war

Nevertheless, there is no information about any connection of the Lutsk Betar members with communism. It was an organization that promoted the idea of creation of a separate state along the banks of the Jordan river.

He dragged a few dozens of people from ghettos

Either before the WWII broke out in September 1939 or after this Vitold Fomenko became a co-owner of a barber shop on Pivnichna Street, 22 (it’s Vynnychenka Street now). When the Germans occupied Lutsk starting from 25 June 1941, he employed 6 Jews right away. He also encouraged other barber shops, owned by Christians, to hire Jews. In spite of their attitude to the Jews, at the very beginning Germans didn’t go wild; on the contrary, they tried to preserve some level of economic organization to maintain order on the occupied territories and collect different kinds of taxes (they were even ridiculous and absurd) to support the war.

When the Jews were relocated to the new ghetto that was created in 1941 at the territory of the oldest part of the city (formally, this was the space between St. Peter and Paul Cathedral to the Styr River behind the Lutheran Church, and from the Bratsky Bridge to the territory of the Great Synagogue), Fomenko started to supply bread, wood and medicine to the ghetto. He took big risk helping Jews in any way, because a person could be accused capitally for providing such help. Here comes an interesting fact. An unknown author wrote in their historical note about Fomenko for the Yad Vashem Memorial that the rich Jews of Lutsk entrusted part of their assets to other residents of the city; Fomenko was one of them. The idea was that if needed, these assets would be used to help Jews. Taking into consideration that the Kronstein, Glicklikh (Polish spelling Kronsztejn, Gliklich) and some other families were the richest in the city, we can assume that they were involved in this.

Shmuel Spector, who escaped to Ural from ghetto, later wrote a book The Holocaust of Volhynian Jews, 1941-1944. In the book he notes that a Ukrainian Vitold Fomenko, using the cover of the night, helped Jews to hide in abandoned houses and later, under favourable auspices, they managed to escape into the forest. Spector says, Fomenko owned a barber shop opposite the synagogue in the village of Strumivka near Lutsk, but it seems to be a mistake. This is because there has never been a synagogue in Strumivka; there were no Jews either (most likely?), since this village was given the name of Strumivka to an old Czech settlement of Teremno. On the other hand, in the text that follows, Spector mentions the Myroniuk family from Strumivka who also helped to hide Jews.

David Prytal was one of them. He told the following about Fomenko: he would come to ghetto with bags of bread and give it to women whose husbands were deported or shot during the first anti-Jew events.

In Encyclopedia of the Holocaust the text below reviews by Robert Rozett and Shmuel Spector says that when Vitold Fomenko visited ghetto with the bags of bread and piles of wood, tried to cheer up the prisoners by telling them funny stories and jokes about German soldiers. 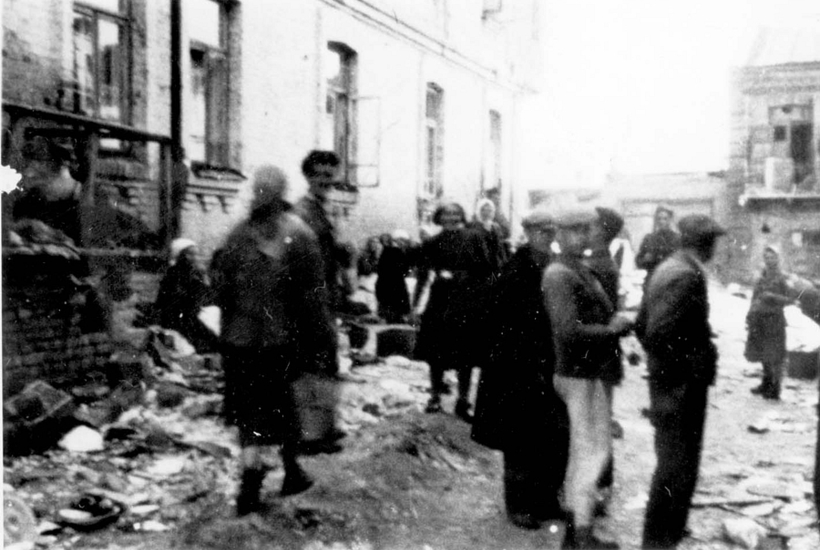 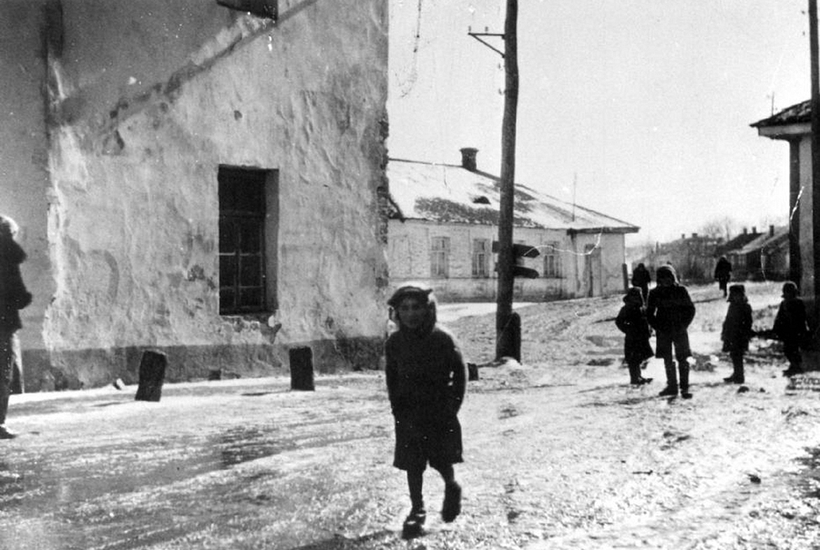 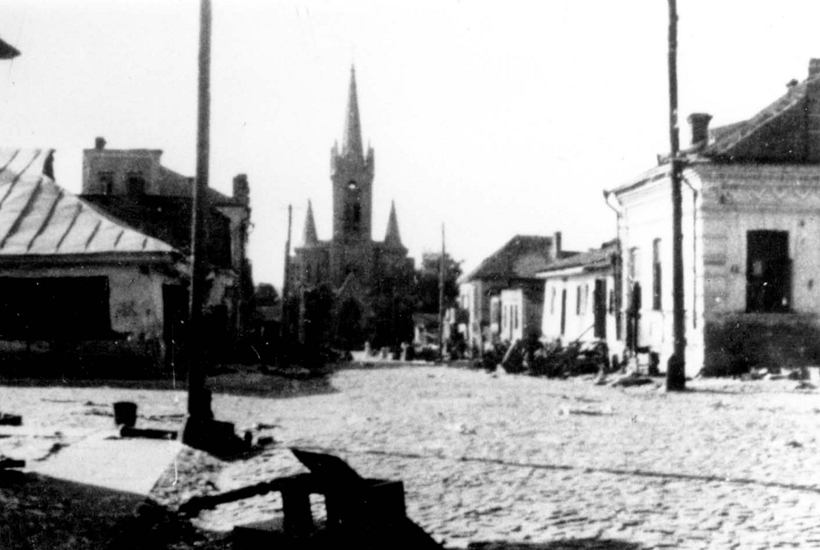 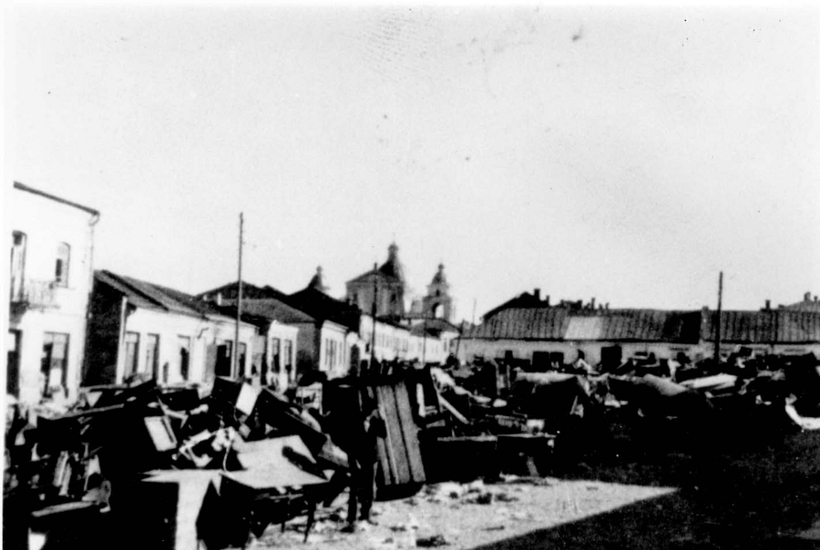 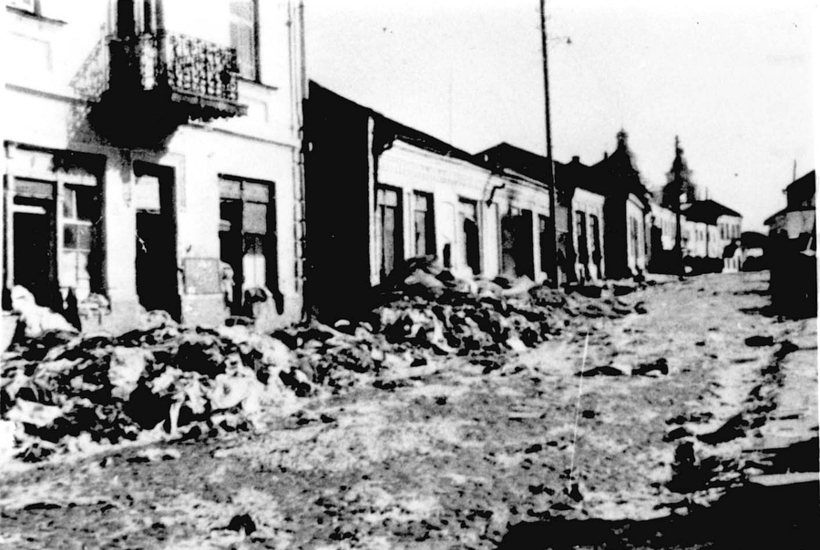 Fomenko wasn’t alone. Sources suggest that Czech and Polish residents of Lutsk were also saviors. So, thanks to his connections in the city administration, the staff of which were mostly Ukrainians, Vitold managed to make counterfeit permissions for Jews. In other cases Fomenko paid big sums of money (could he have taken the money from the assets of the rich families?) to have the counterfeit documents made, namely, refugee cards that were used to ensure a few days accommodation for the Jews who pretended to be Ukrainian refugees. He helped some Jews to get Aryan documents that enabled them to work in Germany. Raizel Grinszpun, Rachel Zafran, Benzion Bernholz had such documents. Pola Krojn, Mieczyslaw Radanek, Israel Friedbojm, Miriam Friedbojm, Eugenia Friedbojm and some others were among the saved ones, too.

Dragging people from ghettos was not an easy task. Once Vitold Fomenko almost forfeited his life. Then Germans (other data say that those were Ukrainians) managed to identify and arrest a saved Jewish woman, Ester Milner. Being tortured, she couldn’t but say that Fomenko was her savior. The Germans caught him as well. The only thing that saved Vitold was that one of German soldiers was his standing customer at the barber shop and that’s why he told to let him go. Fomenko (on the right) with his Jewish friend. The picture taken before the war. Source: Sefer Lutsk

After dissolution of the main part of the ghetto Vitold Fomenko helped Jews from labor camps that were set up on the territory of Moses Gliklikh Jewish Gymnasium situated in Vulka Jewish settlement in Lutsk. In December of 1942 a revolt broke out there, but this outbreak was quickly mastered. This Gymnasium block is now a part of the Pedagogical College situated on Voli Avenue.

Notwithstanding all the kinds of help that Fomenko managed to provide and thus save a few dozens of Jews, only 36 persons survived. Interestingly, Fomenko married a woman he had saved. Her name was Eugenia Friedbojm. When the war ended, the couple left for Israel. Fomenko didn’t live long life, he died on February, 13, 1961. However, he still lives in the hearts of people he had saved during the war.

There are some notes that Fomenko wrote; they depict the events he had seen. It’s very interesting to read them. Some of the notes are very simple and easy to understand, others, on the contrary, are rather deep and complicated thoughts. They planted a tree to commemorate him

Most of the people whom he saved, moved to Israel. It’s clear that many people learned about Vitold Fomenko. And in six years after his death, on December, 12, 1967, he was given the title of Righteous Among the Nations.

In first years when the title was introduced, to commemorate the heroes who saved lives, there were almost 2 000 trees planted on Yad Vashem Memorial complex. One of them was planted in honour of the Lutsk savior. The tree planted in honour of Vitold Fomenko, the savior of Jews in Lutsk

Since then Vitold Fomenko’s name entered The Encyclopaedia of Judaism. Shmuel Spector, Robert Rozett, Martin Gilbert, Israel Gutman and others wrote about him. In 1961 a big book about history of the Lutsk Jewish community was published in Tel Aviv. It contains memories of Shoshana Yakubovitsh, one of the saved. The translation from Yiddish into English was done by Leonard Prager.

«I have taken pen in hand many times. I wanted to write about beloved and good-hearted Vitye Fomienko. I'm sorry I can't remember the names of all the people he helped so much, but the faces of the Jews whom he saved are clear before my eyes.

I saw Witold (Vitye) Fomienko for the first time after all our families in the Lutsk Ghetto had been killed. I stayed alive due to chance and escaped to a small village by the name of Podhayets. Quite a few Jewish boys and girls worked in the fields there and Vitye Fomienko visited them often. He helped them get needed documents and medications. Among other things, he brought oxygen-water for the Jewish girls so that they could dye their hair blond, flee the village and save themselves.

I was then eleven years old and looked like a little blond gentile child. At Vitye's request, his mother took me in – despite the fact that he was already hiding three Jews in his home.

Living with them I noticed how persons of all ages filed into their house in the evenings and slept there – as though it were a hotel. With the exception that in a hotel you pay your bill, and here the Fomienkos risked paying with their lives for their hospitality. Fomienko found hiding places for terrified and hunted Jews with a number of Christians, not once by paying from his own pocket. For hiding Jews he promised the world to these Christians when the war ended. Unfortunately, the war went on longer than people thought it would and neighbors of the good Christians began to see they were shielding Jews and reported them to the police. Often this led to arrest of the Jews and their subsequent execution. Then new troubles arose for Vitye and his family. He was up day and night and kept watch through cracks in his door fearful that his home would be searched for Jews. Luckily no one informed on him. But frightened Christians who managed to escape from the police and whom he had urged to shelter Jews began coming to him for help. And Vitye had to find alternative hiding places in other locations for those he was already hiding.

More than once a Jew managed to escape the clutches of the Germans and returned to Vitye, who with renewed energy began to search about for a new place to hide him.

Vitye's mother was also a fine, good woman; his father was a fine and gentle person. I loved them very much. I myself received from Fomienko's family the best of food and clothing. I owe my life to them».

The article was translated into English by Olena Kotys.